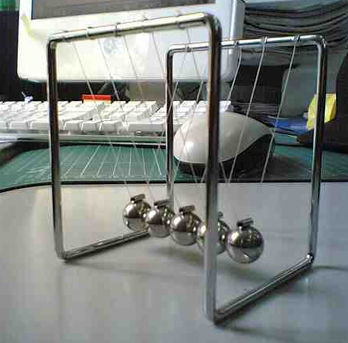 For when the pointy hair is not a blatant enough reason you got Kicked Upstairs.
Advertisement:

The Newton's cradle, named after physicist Sir Isaac Newton, is a well-known science toy that operates on the principle of conservation of momentum and energy. If someone is an executive, they almost certainly have one on their desk. In fact, it nearly signifies "executive". There may be other executive office toys (Lava Lamps, Stress Balls, Rubik's Cubes), but there is something about the Newton's Cradle that especially reminds us of the executive's seat of power, influence and control.

Perhaps it is the fact that they have time to play with something useless, amusing and especially hypnotic (even for an executive toy), unlike everyone else, who is, nose-to-the-grindstone, focused on productivity. Maybe there is the fact that many models are Made of Shiny and are often chrome-like, echoing the popular image of the sleek, Ascetic Aesthetic hypermodern office furniture that we have popularly associated with executive corner offices since the early 70s. Plus, it offers that oh-so-executive functioning of operating with a single swipe or stroke: even when operating useful objects, executives seemingly never do more than press a button or sweep their hands over a panel, or sign their names. We often think of this "single stroke of the hand" as synonymous with "executive" as well.

Perhaps it is they way the device symbolizes their power: over us, over the direction of the company, or over the world itself. This may be a Corrupt Corporate Executive. Especially if they are a technology executive or a media executive.

Another purpose for the cradle is for the executive to fiddle with it while somebody is talking, to signify their lack of respect for the speaker or short attention span. This may be a Pointy-Haired Boss. Especially if they are a technology executive or an entertainment executive. If there's no one around to ignore, this can simply signify boredom.

Nevertheless, the ball clicker often shows up in fantasy sequences that involve the balls being substituted with helpless beings in some form. Having the balls be replaced with skulls or heads seems to be a common subtrope.

Maybe it is supposed to reflect a scientific, analytical mindset, or a love of balance and order (represented by the "every action has an equal and opposite reaction" science behind the toy)...

It may also just be a kind of sloppy shorthand. Sometimes it may signify something, but other times it just may be the props department saying, "Fancy chair, check. Fancy desk, check. Clicky thingy, check." Or it can just give the writers a chance to make a joke about "balls".

Interestingly, as MythBusters' Adam and Jamie showed, this actually only works as a desktop item. It does not work on a grand scale.