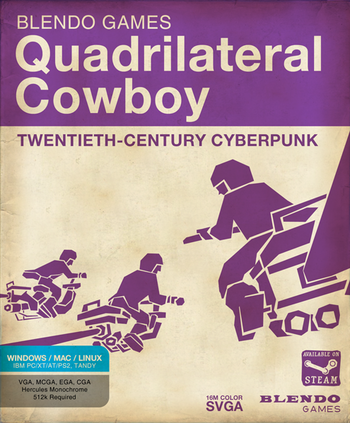 When you have a top-of-the-line hacking deck armed with a 56.6k modem and a staggering 256k RAM, it means just one thing: you answer only to the highest bidder.
— The Steam description
Advertisement:

Quadrilateral Cowboy is a 2016 first-person platforming/spy/hacking game developed by Blendo Games for PC, known for their previous works Gravity Bone and Thirty Flights of Loving. The main gameplay consists of utilizing the Deck, a high speed (for the setting) wireless interface, to set up and use a variety of interesting Schizo Tech gadgets, like controllable turrets and walking drones to solve puzzles.

The story, much like Gravity and Loving, is told without dialogue, but the plot is much easier to piece together this time around. You play as a young woman in a poncho as part of a 3-woman team of hackers/spies, who are hired to do a variety of jobs like stealing bank vaults or gathering sensitive intel for your client.

Compare and contrast Uplink and Hacknet.

tropelist: list all tropes for this piece of media in alphabetical order.