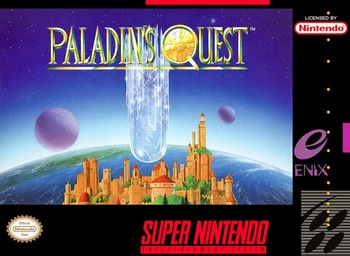 Paladin's Quest (known as Lennus in Japan) is an RPG for SNES. Its most notable features are its unusual magic system and the mercenaries you can hire to pad out your party. It was also noteable for being very, very weird.

Chezni is a 13-year-old boy in a magic school who accidentally activates an ancient weapon of mass destruction and then finds himself Walking the Earth on a quest to defeat it and save the world. Chezni soon meets with a girl called Midia, also a spiritualist, who becomes the only permanent companion on his quest. The plot is complicated by the world-conquering ambitions of the Evil Overlord Zaygos who already rules the southern continent and is eyeing the northern one.

A sequel, Lennus II, was released in Japan in 1996, unfortunately, it was never localized. The fact that it was released a month after the Nintendo 64 in Japan and the obscurity of the original in North America were probably significant factors.

Do not confuse it with the hero shooter Paladins, or the trope The Paladin, which, despite the name, this game doesn't use said trope outside of mercenaries having healing magic (which doesn't fully fit the definition of a Paladin).