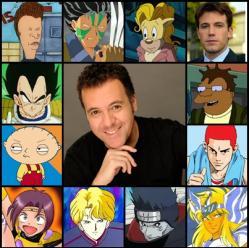 René García (in the middle) and some of his roles.
"¡Insecto!" Explanation "Insect", "bug". Calling his opponents an "insecto" basically became Vegeta's Catchphrase in the Latin American Spanish dub of Dragon Ball Z.
Advertisement:

René Francisco García Miranda (born March 12, 1970 in Hialeah, Florida), better known as René García, is a Mexican actor and voice actor. His roles go for The Lancer, The Dragon and the Hot-Blooded, and tend to also be very... expressive.

He is best known for voicing Vegeta in the Dragon Ball franchise and Hyoga in the Saint Seiya franchise, and is the semi-official voice of Ben Affleck and Keanu Reeves in Latin America.

As the VA for Ben Affleck

As the VA for Keanu Reeves

As the VA for Michael Keaton

As the VA for John Travolta

As the VA for Paul Giamatti

As the VA for Tom Cruise

"¡Ay, no sólo me robó las células, también mis diálogos!"Explanation "Oi! Not only did he steal my cells, but also my dialogues!", a memorable ad-lib by García after Cell called the Z-Fighters "insectos" in the LatAm Spanish dub of Dragon Ball Z.