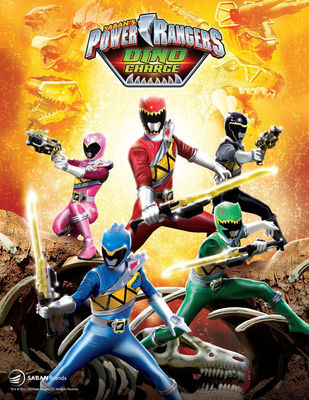 It's about to get wild!
"It's Morphin' Time! Energize! Unleash the power!"
—Morphing call, Power Rangers Dino Charge

The 22nd and 23rd seasons of the long-running Power Rangers franchise, adapting footage from Zyuden Sentai Kyoryuger. This is the third season with a dinosaur motif, following Mighty Morphin' Power Rangers and Power Rangers Dino Thunder.

65 million years ago, the alien Keeper arrived on Earth while being pursued by ruthless bounty hunter Sledge and his evil forces, who hoped to steal the powerful Energems from him. Keeper was able to give the gems to ten dinosaurs for safe keeping, but they were soon lost when asteroids hit the Earth and wiped out the dinos. Now in the present day, five young adults are discovering the lost Energems - and at the same time, Sledge and his forces have returned to continue their hunt. Fortunately, local museum curator Dr. Kendall Morgan has partnered with Keeper in order to harness the Energems' power for the earth protection, turning those chosen by the Energems into the Power Rangers Dino Charge.

This is the second subseries, after Power Rangers RPM, to be established by later crossovers as having taken place in a parallel dimension to the main Power Rangers universe (not the same dimension as RPM).