The Gods Must Be Lazy 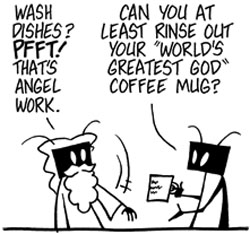 God stinks as a roommate.

"Gardens are tended. Not just watched. Should a gardener not pluck the weed? When I was invited here, I thought you would teach me divine justice, but all you seem to do is just watch while these monsters stain existence with each other's blood."
— Zamasu, Dragon Ball Super
Advertisement:

In a setting where there are demons and angels or the equivalent forces of cosmic evil and good, evil will go out into the world and raze villages, kill people and destroy the countryside. God, meanwhile, will be impotent and only exist as a symbolic force to inspire the heroes. Either that or you'll have the Powers That Be, incapable or unwilling to stop the rogue God of Evil. Either way, they won't have a hands-on approach.

This is to prevent the feeling of Deus ex Machina, but in-story it doesn't work well. The message seeming to be that good deities are entirely useless but evil deities can do whatever they want. The explanation for this is usually that God solving people's problems would prevent free will... but if you think about it, demons coming from another world to wreak havoc on all mankind sure is screwing around with free will and the least the angels could do is get off their bums and keep a damn balance.

Another explanation is that good "plays by the rules" and both sides "promised" not to interfere on Earth... but in practice, evil can lie, and figures losing a few demons to humans is a cheap price for the unopposed demons everywhere else. Inevitably, the angels only come help once the mortals have done in the bad guys, or when the bad guys have grown so powerful that only a Deus ex Machina could possibly stop them. Any celestial good-aligned being that's proactive will inevitably be eviler than the basest villain in practice if not intent, intent as well as practice, or simply quickly done away with.

It may also be that it's actually more acceptable to show the forces of evil than the forces of good. For instance, you have shows like Reaper where The Devil is a main character. Conversely, there was a short-lived show where the main character talked to God. Guess which one the Moral Guardians really brought the hammer down on? And some religions dislike the display of images of their deities. It might also be more about the fact that if you have good-mortals-plus-angels vs. evil-mortals-plus-demons then the battle is too even, so to have the good mortals fighting against impossible odds the angels have to sit it out because The Underdogs are always who the audience is supposed to root for.

This trope is a bit influenced by a change in attitudes about real-life war & conquest in the 20th century. Just declaring war and rolling in the troops is something the "bad guys" did (like World War II Nazis), while inspiring resistance forces from afar with weapons and supplies, but letting the fight ultimately be up to the locals, is more the "good guys" style. (Yes, there's quite a lot of asterisks to this in the real world.)

See Also: God's Hands Are Tied, Good Is Impotent, Powers That Be, Have You Seen My God?. If the good deities aren't just lazy but flat-out don't exist, that's Devil, but No God.

The trope-name comes from the film The Gods Must Be Crazy. If this trope is averted (i.e. the Gods take a very active role in fighting evil), see Heaven, Hell, and God Is Good. The villainous version of this is Orcus on His Throne.