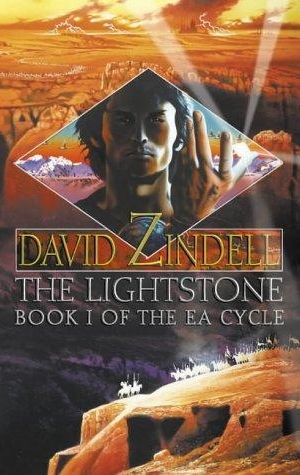 The Ea Cycle is a fantasy tetralogy by David Zindell narrated in first person by Valashu Elahad, a prince of Mesh. In the beginning, Val goes on a continent-spanning quest for the Lightstone, a holy artifact that the fate of the universe hangs on. But Val and his stereotypically diverse group of friends also need to keep the Lightstone safe from Morjin, the Big Bad leader of The Empire, until the Lightstone can be claimed by its rightful wielder, the Maitreya.

Expect a lot of talk about chakras and meditation and ascending to a higher state of existence. Zindell is obviously heavily into New Age and it shows.