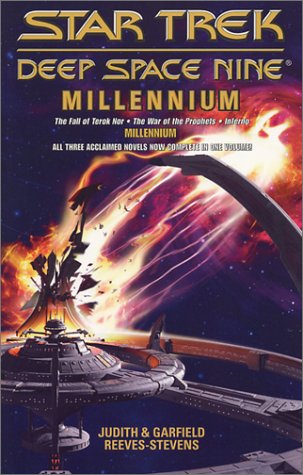 A trilogy of novels in the Star Trek Expanded Universe, an epic time-travel adventure featuring the characters of Star Trek: Deep Space Nine. It doesn't fit entirely into the modern continuity, but given the themes of myriad alternate realities and interlinking timelines, that isn't a problem either way. The three books are The Fall of Terok Nor, The War of the Prophets and Inferno, and the plot involves a full-scale religious war erupting in an alternate future timeline, the result of an attempt by factions of the Wormhole Aliens to reunite their splintered civilization. Unfortunately, success will mean the end of the universe.
Advertisement:

The trilogy shares a great many plot points with the Deep Space Nine computer game, The Fallen.