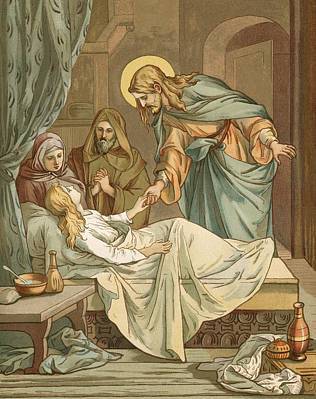 "Their gift to the traveler is a simple one — they heal those who are in pain."
— The Temple of Stendarr
Advertisement:

A deity or demigod whose specialty is healing. Most gods can heal in a pinch, but they are not pure healers with a healing domain within a Fantasy Pantheon. In real-life mythologies, this god is the one who teaches medicine and is the patron for human healing arts. This trope is Older Than Dirt since it appears in stone age cultures, Ancient Egypt, and Mesopotamian Mythology.

This trope is for deities and not mortal characters with a healing ability like Healing Hands. This type of deity is often The Medic for their Fantasy Pantheon and is a source of Life Energy or White Magic for player characters needing healing. This type of deity tends to be on the good side of Balance Between Good and Evil or Black-and-White Morality, or on the side of life in Life/Death Juxtaposition against death.