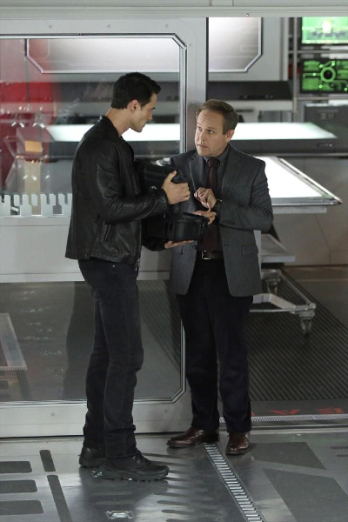 Ward and Randolph discuss berserker rage and how to get rid of it.
"In ancient times, people believe the heavens were filled with gods and monsters and magical worlds. Then, as time passed, those beliefs faded into myth and folklore. But now we know the stories are true. Other worlds, with names like Asgard, do exist. And beings once revered as gods, like Thor, have returned, leaving us with more questions... and an enormous mess to clean up."
—Simmons' Opening Narration

The eighth episode of Agents of S.H.I.E.L.D., directed by Jonathan Frakes.

Coulson and his team deal with the aftermath of Thor: The Dark World by cleaning up after the battling titans and searching for any Asgardian or Svartalfheim tech they may have left behind. Meanwhile, a Norwegian paganist hate group has already found an item that's been hidden for centuries — the Berserker Staff, which gives anyone who touches it Super Strength by drawing on their hidden rage. The paganists want to take Earth back from the gods by becoming gods themselves, so they use the staff to create a small army of berserkers. To stop all this, Coulson's team seeks the help of Professor Elliot Randolph (Peter MacNicol), an expert in Norse mythology who is more than meets the eye. Along the way, Ward touches the staff and falls victim to its power, becoming emotionally unstable as he's forced to remember a traumatic incident from his childhood.