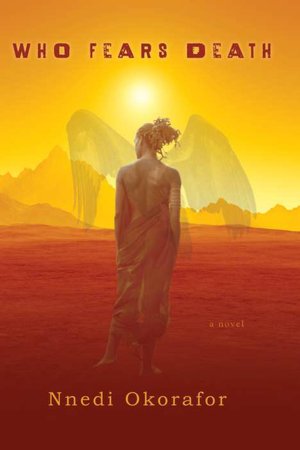 One day she would be able to shout her name.
Who Fears Death is a 2010 fantasy novel by Nnedi Okorafor which takes place in an alternate or After the End Sudan. Its heroine is Onyesonwu Ubaid-Ogundimu, a young woman who is an Ewu, the product of the rape of a woman of the Okeke tribe by a man of the Nuru tribe. Because of this she is shunned by the villagers in the town she grows up in, and haunted by the spirit of her biological father, a powerful sorcerer who wants her dead. However, Onyesonwu discovers that she has a talent for magic, especially shapeshifting, and under the tutelage of Mwita, a slightly older Ewu boy, and his master, the somewhat Jerkass Trickster Mentor Aro, she begins to cultivate her magical ability. However, Onyesonwu's father is still out there, and she has a special destiny ahead of her...
Advertisement:

A prequel explaining The End of the World as We Know It, The Book of Phoenix was published in 2015.