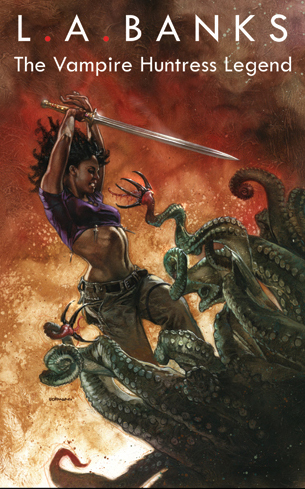 A vampire series by L. A. Banks following Damali Richards, the ultimate vampire huntress, and her team as they fight...well, vampires and other supernatural beings, which are in this series demons from Hell that mainly attack people with darkness in their hearts. This job becomes more difficult when Carlos Rivera, Damali's love interest, is turned into a vampire because of his lifestyle as a drug dealer. The twelve-book series uses religious and mythological lore as the Neteru team fights demons while becoming physically and emotionally stronger, whereas Carlos works as a Reverse Mole for Damali's team, ultimately God brings him back alive and he is discovered to be the Male Neteru. Afterwards, the series shifts from fighting random vampires to fighting Satan's wife Lilith, who is setting up the Apocalypse while tending to the Antichrist, who will rule the world it not stopped.

The twelve books in the series are:

Besides these, there are short stories exploring what some characters were during before the start of the series, and ones called Between the Books that tell stories about things that happened between the books. The latter stories can be read on the series website

. A comic series taking place after the last book is planned.

The series also has a companion novel, Shadow Walker, which takes place after the Armageddon and follows the children of the Neteru guardian team as they train to become fully-fledged guardians like their parents and continue the battle against the forces of darkness.