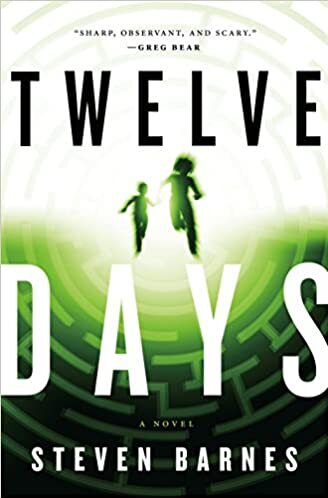 Twelve Days is a 2017 paranormal thriller by Steven Barnes.
Advertisement:

On December 12, a group calling themselves the Elite upload an article to various websites, saying that The End Is Nigh and that the sinners will start to die on December 13, with the number of deaths doubling each day. Most people don't take it seriously, until several high-profile criminals suddenly suffer violent convulsions and die. Meanwhile, Olympia Dorsey, a single mother raising her thirteen-year-old daughter Nicki and her eight-year-old autistic son Hannibal, and their neighbor Terry Nicolas, an ex-Special Forces soldier, visit Golden Dream, a martial arts studio run by an international religious movement, where the instructors believe that Hannibal has incredible untapped potential. The movement's guru, Madame Gupta, invites Olympia and Hannibal to stay at Salvation Sanctuary, a retreat in the mountains, where Hannibal can learn to access his abilities, but she doesn't tell Olympia about the group's secret plans for Hannibal.