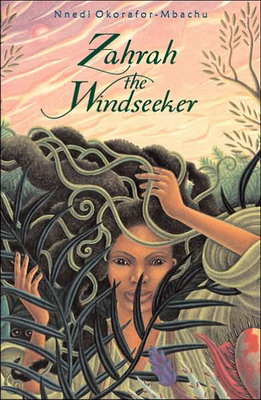 Zahrah the Windseeker is the debut novel of Nnedi Okorafor, published in 2005. The story is a Science Fantasy set on the fictional planet of Ginen, where people live in, with, and by the plantlife, growing not only their food but their houses and their computers. And yet for all this, the Ooni Kingdom has strict boundaries. No one is supposed to go into the Forbidden Greeny Jungle. No one remembers why and no one wants to remember.

Zahrah Tsami is an ordinary thirteen-year-old girl. Ordinary except for the fact that she is dada, that is born with dreadlocked hair that is full of vines. While her parents celebrate this unique aspect of their daughter, Zahrah is an outcast, often bullied at school. She has only one friend, a boy called Dari, who unlike her is very popular. He's been looking out for her since they were seven years old.

When Zahrah passes her menarche it's a cause for celebration in her family. But it also starts Zahrah down a confusing path with a lot of questions she can't ask as this onset of puberty brings with it the ability to float in the air. What little material she and Dari can find says that Zahrah is a windseeker. Dari comes up with the idea that they should go into the jungle so Zahrah can practice.

However, Dari is bitten by a venomous snake, and the only cure is an egg from a creature that lives deep in the jungle. Terrified but determined, Zahrah refuses to give her friend up for dead and sets off all on her own to face the Forbidden Greeny Jungle.

Zahrah the Windseeker contains examples of the following tropes: