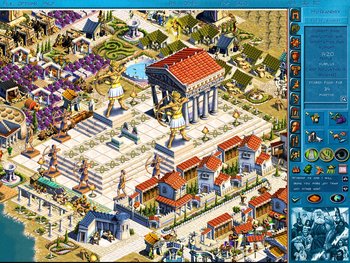 Zeus: Master of Olympus (2000) is the Ancient Greece installment of the City-Building Series.

Players seek to build up their city-states while fending off attacks from rival cities, ferocious monsters, and even gods while calling on the greatest heroes of Greek Mythology to help them.

The stand-alone expansion, Poseidon: Master of Atlantis, puts the player in charge of Atlantis.