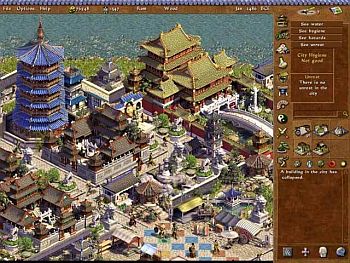 Emperor: Rise of the Middle Kingdom, also known as simply Emperor, is the sixth game of the City-Building Series developed by Impressions Games and published by Sierra in 2002, this time set in Ancient China and developed by Breakaway Games.

Contrary to most other city builders, the focus of Emperor's gameplay is less on building up a large, populous city, but instead is on building and maintaining the infrastructure needed to run a city. Players must keep their people supplied with food, water, and goods from markets, and also build religious shrines, medicinal buildings, entertainment schools, and inspector and sentry towers among their housing. These buildings spawn "walkers" that patrol the city administering their servivces to houses they pass. As your citizens are given what they need, they'll renovate their houses into larger houses that can accomodate more people, and their demands shift from basic necessities to luxury services.

Meanwhile in your industrial sector, players must not only build craft workshops to supply the people with what they need, but also make sure that those workers are supplied with raw materials like metal, wood, clay, etc., so they can produce those commodities. Combined with the fact agricultural crops have growing seasons each year, and this means managing your city's infrastructure by making sure you produce enough food each year to last your city at least until the next harvest, having enough workshops to produce enough goods to sustain the level of comfort your citizens expect, and ensuring those workshops are being supplied with enough raw materials to keep working. Players can use the Industry tab to set priorities to certain areas of city management that your workforce will staff first, and also shutdown industries on either an individual basis or all of them across the city.

Finally, you are not alone in the world. There are rival cities out there and just like you they need to maintain the needs of their people. With friendly relations, you can establish trade routes to export excess goods and import things you need, can give and receive gifts of goods, and maybe even get them to agree to a military alliance. If things go hostile, your rivals will demand things of you, send spies to sabotage your city and steal your goods, and even rally a military force to invade and conquer you. Fortunately, you can do all of these things back to them. You can be The Good King who forms The Alliance with friendly neighbors, or you can be The Emperor who forms The Empire by conquering rivals one by one.note Of course, in the name of historical accuracy, you'll probably end up being that second one most of the time.

The single-player campaign spans millennia of Chinese history as the player acts as various historical figures, some addressed by name, others are just a flunky to The Emperor of the time building his city for him. As time progresses through the campaign, technologies (and resources) become outdated and are replaced with different technology, such as iron smelting replacing bronze smelting, bronze and iron each being used by different industries. Objectives often demand the player produce a set amount of a commodity within a year, get a certain population level, or conquer neighboring cities. You also get to build famous monuments, from stock temple complexes and palaces to Su Song's clock tower, the Grand Canal, and inevitably, the Great Wall of China.