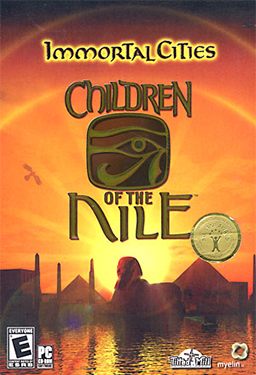 Immortal Cities: Children of the Nile is a Simulation Game developed by Tilted Mill Entertainment for PC in 2004 as part of their City-Building Series. It also received an Expansion Pack called Alexandria.

Like its spiritual predecessor, Pharaoh, the game is set in ancient Egypt, and in campaign and scenarios it follows the exploits of several dynasties throughout history. You'll get the chance to construct massive Mastabas and Pyramids, battle against other tribes and neighbours, and cultivate the fertile banks of the Nile, to provide places to worship the many Egyptian gods and to give a safe passage to the afterlife to your citizens and Pharaoh.

Children of the Nile radically breaks with established concepts from previous games (such as walkers, apartment blocks for workers or active gods). It was also the first in the series to go fully 3D, but the graphics were found to be a bit lacking. It remains something of an odd one out in the series, but was still appreciated enough to retain an official website until 2020.