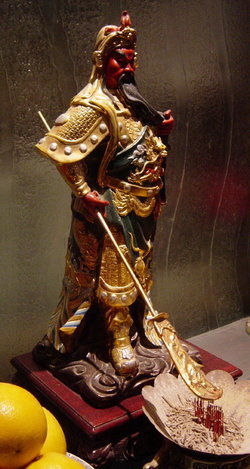 Guan Yu is one of the most famous names amongst the Three Kingdoms era in China. He's known for his extremely long and beautiful beard, having red skin, being the one who popularized the weapon 'guandao/yanyuedao' (lit. weir moon blade, though in Europe it would just be called a glaive) via his personal weapon, the Green Dragon Crescent Blade, in addition of being one of the few figures in China that went from a mortal into being deified as a god in the Chinese Mythology. Chances are, you often see statues or paintings about him in China, or a few of them in your local Chinatown stores.

Guan Yu, style name Yunchang (or Changsheng depending on if records were spotty or if he changed his style name later in life), was one of the main generals of the Shu Kingdom, founded by his sworn brother Liu Bei. He was very loyal to his brother and if able, would always stick with him no matter what, participating in campaigns against the Yellow Turbans, Dong Zhuo's tyranny, and pretty much anything else. When Liu Bei's rival Cao Cao managed to capture him and persuaded him to serve him, Guan Yu agreed only on one condition: One moment Liu Bei's whereabout was revealed, he would ditch Cao Cao and come back to his brother. And he did, even if Cao Cao showered him a lot of prizes (including Red Hare, which once belonged to Lü Bu).

However, like many men, Guan Yu has one glaring flaw even if he upheld his loyalty to Liu Bei: He was rather prideful and arrogant, which eventually came to bite him back in the ass when he incited the wrath of another rival warlord, Sun Quan of Wu, by provoking them to attack him when they already had problems with his position at Jingzhou. A combination of Underestimating Badassery of the Wu commander Lu Meng and some miscommunication within his own men caused Guan Yu's men to desert him in a most crucial time and he was captured and executed by Wu, costing Shu a good portion of Jingzhou, their strategic domain at the center of China, and it was just downhill for Shu afterwards.

As time passed, values started to shift. In the wake of the turbulence in China after the Three Kingdoms era, people started to latch on the people of Shu, and to appease the government, people started writing pro-Shu stories that gave much praise to them, Guan Yu included, for this one value that was highly revered: Loyalty. For all his flaws above, Guan Yu still valued his loyalty to his brother and the Han Dynasty, making those stories easier to digest. In addition, despite his flaws and downfall, Records of the Three Kingdoms/San Guo Zhi has stated that Guan Yu was a man that exudes honor and merit, spoken highly by friends and foes alike, including Cao Cao and even Lu Meng.

It eventually culminated with the release of Romance of the Three Kingdoms, a very exaggerated epic story about the Three Kingdoms era, where Guan Yu got a lot of new stories that hyped him up as an all around great hero and has a better leadership quality, while still adhering to his honor code and loyalty to his brother. Lots of favorable stories on him get introduced in this epic, like him passing through five gates single-handedly and easily killing off those that barred his way, killing several fearsome generals, or even letting go of Cao Cao when he had a chance to kill him in order to repay his kindness when he was under his custody. Of course, while it's a little toned down, the epic still did not shy away from showing Guan Yu's growing arrogance that led to his downfall.

Regardless, the novel went on to become one of China's most epic stories that even eclipsed historical reports and people started revering Guan Yu even with his flaws around, based on his performance at the novel. The amount of worshippers continue to increase that eventually Guan Yu was deified as one of the Gods in Chinese Mythology. While it may be surprising how a flawed man like him can become a God, the worshippers made it clear that what they worship on him wasn't his war prowess, but rather his 'brotherhood' and loyalty values. Still, it didn't stop some people from thinking that he's the Chinese War God. In fact, the growing worship of Guan Yu strengthened because some people claimed that he blessed them while they went on a war for what they thought to be a righteous cause.

A flawed man going to become a revered hero and eventually a worshipped deity. There are really few to none people in this world that can achieve such thing in their existence aside of Guan Yu.

Not to be confused with Lee Kuan Yewnote If you speak of Guan Yu's name via authentic tongue (not English), then it would be pronounced like 'Kuan Yu', which is close enough to the last two words of the name of the first Prime Minister of Singapore (who was born WAY later).

Tropes as portrayed in other fictions

Appearances in other fictions