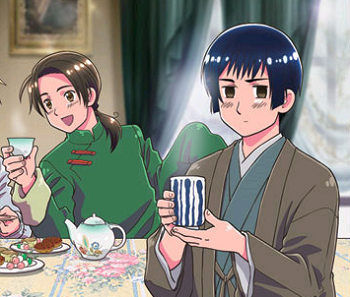 A fairly common stereotype, Asian characters (especially East Asians and South Asians) are shown to rival the British when it comes to downing cups of warm, well-made tea. The reason is simple: tea was invented in China over five thousand years ago and quickly spread to its neighbors, then all around the world. As such, the Asian love for tea is associated with tradition and the old ways.
Advertisement:

Expect to see wise old Magical Asian mentors and other traditional characters being very picky about their tea brewing temperatures, tea as the Trademark Favorite Drink of the Token Asian or members of Asian diasporas, references to high-class drinking practices and/or elaborate and intricate tea ceremonies, and Asian tourists scoffing at coffee and complaining that Western tea tastes like dishwater.

In Real Life, tea drinking remains an integral part of culture and routine in many parts of Asia to this day, with many variations throughout individual countries and across the continent, though some countries are actually more partial to coffee. Turkey is the largest tea consuming country in the world, and it's situated in (West) Asia.

Note that it is not enough to be an Asian character who drinks tea, especially if the majority of the cast is Asian. The work has to link the two traits, such as by emphasizing its importance in traditions, having most if not all Asian characters be avid tea-drinkers, or by contrasting them against the tea-drinking habits (or lack thereof) of non-Asians.

For information, see our page on Tea and Tea Culture. Compare Brits Love Tea, Must Have Caffeine, Drink-Based Characterization.