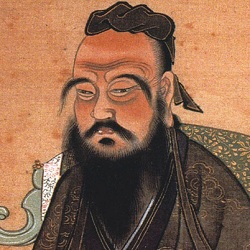 Tsze-lu (Zilu) said, "The ruler of Wei has been waiting for you, in order with you to administer the government. What will you consider the first thing to be done?"
The Master replied, "What is necessary is to rectify names." "So! indeed!" said Tsze-lu. "You are wide of the mark! Why must there be such rectification?"
The Master said, "How uncultivated you are, Yu! A superior man, in regard to what he does not know, shows a cautious reserve.
"If names be not correct, language is not in accordance with the truth of things. If language be not in accordance with the truth of things, affairs cannot be carried on to success.
"When affairs cannot be carried on to success, proprieties and music do not flourish. When proprieties and music do not flourish, punishments will not be properly awarded. When punishments are not properly awarded, the people do not know how to move hand or foot.
"Therefore a superior man considers it necessary that the names he uses may be spoken appropriately, and also that what he speaks may be carried out appropriately. What the superior man requires is just that in his words there may be nothing incorrect."
— The Analects
Advertisement:

'Confucius' (September 28, 551 BC – 479 BC) is the name given to an extremely influential Chinese philosopher who lived in the 6th century BC. After his death, his teachings were compiled in a work known in the English-speaking world as the Analects of Confucius (Traditional: 論語; Simplified: 论语; Pinyin: Lún Yǔ, lit. "discussion over (Confucius') words" — though "analects" means "a collection of excerpts from a literary work" and is thus an inaccurate translation).

The name "Confucius" comes from the 16th century Latin translation of the Analects by the Jesuit scholar Matteo Ricci, who introduced him to the Catholic world. The Mandarin is Kǒng zǐ (孔子; "Master Kong") or Kǒng Fūzǐ (孔夫子 "Grand Master Kong"). He is known as Koshi in Japan. In Chinese tradition, his names are (in Hanyu Pinyin) Qiu (丘, his given name or "ming") and Zhongni (仲尼, his courtesy name ("zi") and almost never used by his disciples). (Yes, you can call him "Johnny Kong" if you want to be utterly informal.)

Confucius's enduring legacy is the codification of an ethos that predated him by centuries into a system of relatively coherent moral codes. note Indeed, he sees himself as "merely" preserving and passing on values prevalent during the Western Zhou era. It is sometimes said Buddhism or Taoism are not so much "religions," as they are philosophies. Confucianism however isn't even so much a philosophy, as it is a model of behavior. There have been several cycles of decay and revival in the history of Confucianism, but the latest wave of Neo-Confucianism is at the core of what has been claimed as 'traditional' values in East Asia: a strong emphasis on family life and loyalties (filial piety), deference to authority and personal responsibility in authority (feudal loyalty). Associated with these are the prizing of self-discipline and (academic) learning. After his death, it was proclaimed as the official religion/ethos of the Han dynasty during the reign of Emperor Wu. (Whether they actually did it is another question entirely; a common proverb about the Han states was that they went for Legalism

under the banner of Confucianism) and went on to become insanely popular. It was one out of the few hundred schools of thought to actually achieve notoriety and holds enormous sway over modern ideology and politics. note  One reason for the massive influence is that Confucius advocated a path for all scholars, which is for them to become officials. As it turned out, many of Confucius's disciples did become officials, and they in turn used their influences to elevate their teacher to the status of a sage. Another reason is that Confucius's teachings are more easily followed by the upper classes, i.e. the classes who can afford to be educated and then seek their fortunes at officialdom.

The Master said, "Is it not pleasant to learn with a constant perseverance and application? Is it not delightful to have friends coming from distant quarters? Is a gentleman not a man of complete virtue, who feels no discomposure though men may take no note of him?"

The (supposed) descendants of Confucius have carefully maintained their family records for the past 2,500 years and are now in their 83rd generation.

Tradition says that Laozi was a contemporary of his and that they met. Historical evidence seems to be that this is impossible, with Laozi either being a mythic figure or living rather later.

In Western popular culture, the name of Confucius is often attached to joke proverbs expressed in mangled English, e.g. "Confucius say: He who no take candle not very bright." It hopefully goes without saying that the genuine article's thoughts were somewhat deeper; one problem with translations into European languages is that classical Chinese is a notoriously laconic and nuanced language, as if being of a completely different language group wasn't enough. In any case, "Confucius say..." or "Wise man once say..." are prefaces to facetious 'quotes'; texts that actually reference Confucius generally begin more eloquently, e.g. "The Master said..."