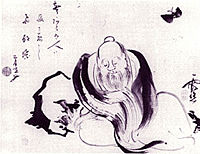 Zhuangzi was a Chinese Taoist philosopher of the Warring States period with a deep influence on Chinese Buddhism. He was famous for telling parables and inventing koans. A few centuries later, Zhuangzi's style got mixed up with Mahayana Buddhist theology to create the school of Chán, known to the West by its Japanese name: Zen.

However, in the West, he is best known as the man who couldn't figure whether he was a butterfly and is hence half the Trope Namer for Schrödinger's Butterfly and proof that All Just a Dream is Older Than Feudalism. He was also a major (but unacknowledged) influence on the famous German philosopher Martin Heidegger.note  According to the Japanese philosopher Tomonobu Imamichi, Heidegger's central concept of Dasein (there-being) was partially developed after reading Okakura Kakuzo's The Book of Tea, which described Zhuangzi's philosophy as "being-in-the-worldness."

Tropes That applied to Zhuangzi: