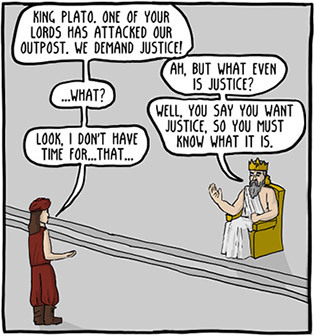 "Solomon's wisdom was greater than all the people of the East, and greater than all the wisdom of Egypt. He was wiser than anyone else... and his fame spread to all the surrounding nations. He spoke three thousand proverbs and his songs numbered a thousand and five. He spoke about plant life, from the cedar of Lebanon to the hyssop that grows out of walls. He also spoke about animals and birds, reptiles and fish. From all the nations people came to listen to Solomon’s wisdom, sent by all the kings of the world who heard of his wisdom."
— 1 Kings 4:30-34, The Bible
Advertisement:

It is a more enlightened age. Perhaps a future, or a past long forgotten, when rulers are noble and just, and rule for their people, not just for themselves. Perhaps it is an Age of Reason, in which older, barbaric measures of manhood such as war and business have been phased out, and replaced solely with pure, unclouded reason and rationalism. Only those who have the capacity to think have the right to rule. In this realm, the Philosopher King is found.

and Adolf Hitler are not true Philosopher Kings in the concept of this trope, but rather subversions of the concept, since the Philosopher King is envisioned as purely benevolent. Pursuing a philosophy with force usually leads into Gone Horribly Wrong or Gone Horribly Right. At worst, the result will be an Intellectually Supported Tyranny. It is sufficient to say this has happened in the Real Life, so any specific examples of subversions are redundant. One must also distinguish kings who occasionally reflect and pontificate about their times and fashions, i.e. the tendency in Historical Fiction to portray figures of the past as more reflective and self-aware of their times and eras than the figures in question could have reasonably been.