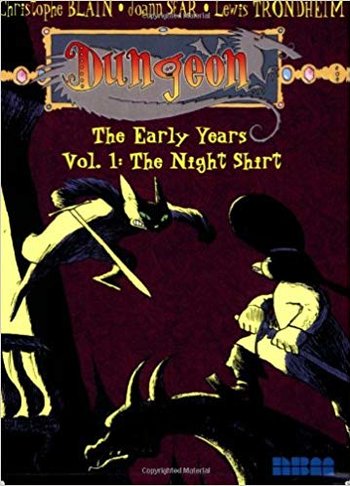 "The people of this modern world looks on their fellows as tools. To such people, men are nothing but a means, not an end in and of themselves. That leaves precious little room for honor, elegance and panache."
—Hyacinthe Cavallere a.k.a The Night Shirt
Advertisement:

Originally titled Donjon Potron-Minet, The Early Years is a french Funny Animal/Fantasy comic written by Joann Sfar and Lewis Trondheim and designed (in the beginning) by Christophe Blain. The comic is part of the greater Dungeon franchise created by Trondheim and Sfar and is chronologically the first in the series, chronicling the dungeon's eventual rise as well as the youth of its keeper Hyacinthe Cavallere.

As the comic starts, Hyacinthe has left his father's kingdom in order to go to the city to visit his uncle, the Count of Florotte, who was banished from the kingdom by Hyacinthe's grand-father, because a crippled prince would have brought shame on the family. Upon arriving in the city, Hyacinthe is taken in by his uncle, who in exchange for the room and board wants his nephew to become the assistant of Florotte's assistant, Michael. As luck would have it, Hyacinthe finds out that his uncle is more or less the local Mafia don and that Michael is his top henchman. Determined to combat the crime and corruption of the city, without his uncle's knowledge, Hyacinthe becomes the masked avenger known as The Night Shirt.