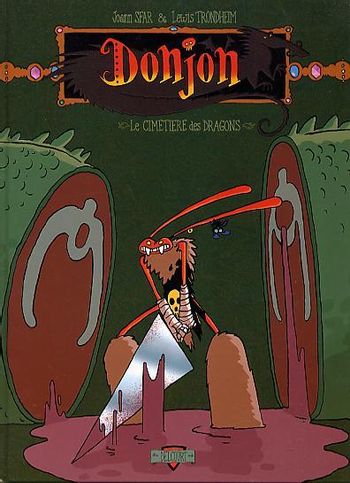 Dungeon Twilight, originally titled Donjon Crépuscule, is a French Funny Animal/Fantasy comic series written by Joann Sfar and Lewis Trondheim. It deals with the end of the Dungeon-Verse, which takes place a couple of years after the Zenith series. Time has passed, the Dungeon is now the Black Fortress, where the Dark Khan rules the world with an iron fist. The planet has stopped spinning thanks to his power, avoiding its destruction. It also leaves the Twillight, a thin line between the always Day area and the always Night area, as the only place where life can endure. This is all thanks to the power that the Dark Entity gave to him when Herbert of Vaucanson got a hold of the seven Items of Destiny. Herbert has been corrupted by the Entity and while he still has control, his Dark Khan persona is a far cry from the protagonist he was during the Zenith timeline: cynical, murderous and tyrannical. Marvin, now called the Dust King, has been kept in prison under his former friend's order. Blind and old, he finally leaves when he meets Pipistrelle, a small talking bat who can guide him to the dragon cemetery for his ultimate passing. Along the way he will meet Red Marvin, an exiled rabbit from a xenophobic village, and promises to make them pay for their insult. But it seems gods and outer forces have another plan.
Advertisement:

While Early Years was somewhat a parody of swashbuckling adventure and Zenith was a parody of Dungeons & Dragons games until the story took a darker turn, Twilight is from the get go a Darker and Edgier story dealing with death and the End of the World as We Know It.