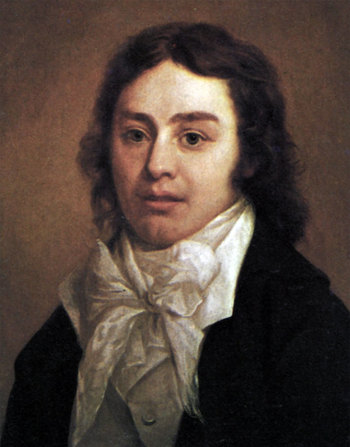 A portrait by Peter Vandyke.
"No man was ever yet a great poet, without being at the same time a profound philosopher. For poetry is the blossom and the fragrancy of all human knowledge, human thoughts, human passions, emotions, language."
—Samuel Taylor Coleridge, Biographia Literaria
Advertisement:

Samuel Taylor Coleridge (21 October 1772 – 25 July 1834) was an English poet, literary critic, theologian, and philosopher. He and fellow poet William Wordsworth were credited as the founders of Romanticism in England, with the publication of their Lyrical Ballads in 1798. In addition to poetry, Coleridge wrote a number of works of literary criticism, philosophy, theology, and politics.

Coleridge was born on 21 October 1772 in the town of Ottery St Mary, the youngest of fourteen children, to Reverend John Coleridge, the town vicar; and his second wife Anne Bowden. Coleridge spent his early boyhood keeping to himself and reading, but when his father died in 1781, Coleridge went to Christ's Hospital School in London, where he remained throughout his childhood, studying and writing poetry. It was also during this time when he was first prescribed opium, in the form of laudanum, as a remedy for fever; this would develop into an addiction in the later years. He then went to study at Jesus College in Cambridge in 1791, but having acquired a large amount of debt, he left the college and attempted to pay it off by enlisting in the 15th (The King's) Regiment of (Light) Dragoons, under the pseudonym "Silas Tomkyn Comberbache". However, he was not fit for military life. He kept on falling off his horse, and he could not groom it or the accoutrements. However, he managed to get those duties off his hands by telling the soldiers stories, nursing them when they were sick, and writing love letters for them to send to their wives. Eventually, his true identity was revealed. His brothers then arranged to have Coleridge discharged under the reason of "insanity", and paid off his debt.

Coleridge was then readmitted to Jesus College in April 1794. At one point, he met another poet named Robert Southey (better known as one of the original authors of Goldilocks), with whom he developed "Pantisocracy", a project in which they move to Pennsylvania and establish a system of government where all rule equally. When he learned that Southey married a woman named Edith Fricker, as marriage was integral to the project, Coleridge agreed to marry her sister, Sara Fricker. His marriage with her proved to be unhappy as he spent much of his time apart from her, and the Pantisocracy project was abandoned when Coleridge and Southey could not agree on the location, with Southey having doubts about the commune's viability and proposing that it be established in Wales instead. Coleridge never returned to Cambridge to get his degree and spent the next few years starting his career as a writer.

Coleridge first met William Wordsworth and his sister Dorothy in 1795. Coleridge and Wordsworth became good friends and they published the Lyrical Ballads in 1798, starting the Romantic movement in England. His most important contribution in the Lyrical Ballads was the poem The Rime of the Ancient Mariner. In the same year, the trio visited Germany, where Coleridge developed an interest in the ideas of the German philosophers like Immanuel Kant, Johann Gottlieb Fichte, and Friedrich Schiller; he returned to England and took some of their ideas with him. In 1799, Coleridge joined the Wordsworths, who were staying at the Hutchinson farm in Durham. Wordsworth was waiting for an inheritance to be settled so he could wed Mary Hutchinson; and Coleridge fell in love with her sister Sara, who appears in his journals and poems as "Asra."

Perhaps because he conceived such grand projects, he had difficulty carrying them through to completion, and he berated himself for his "indolence." It is unclear whether his growing use of opium was a symptom or a cause of his growing depression. "Dejection: An Ode," written in 1802, expresses his despair at the loss of his creative powers. In 1804 he travelled to Sicily and Malta, working for a time as Acting Public Secretary of Malta under the Commissioner, Alexander Ball. He gave this up and returned to England in 1806; Dorothy Wordsworth was shocked at his condition upon his return. His opium addiction (he was using as much as two quarts of laudanum a week) now began to take over his life: he separated from his wife in 1808, quarrelled with Wordsworth in 1810, lost part of his annuity in 1811, put himself under the care of Dr Daniel in 1814, and finally moved in with Dr Gilman in Highgate, London, where the doctor and his family managed for the next 18 years to keep his demon under control.

At this same time, he was establishing himself as the most intellectual of the English Romantics, delivering an influential series of lectures on Shakespeare in the winter of 1811-12 and bringing out his Biographia Literaria in 1817. Among his contemporaries, he was best known as a talker, in the tradition of Samuel Johnson: his "Highgate Thursdays" became famous. He died July 25, 1834.