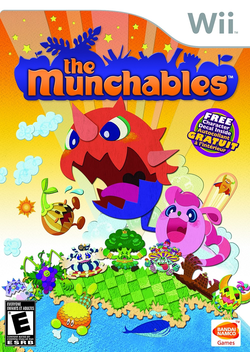 The Munchables is a 3D Platform Game developed by Bandai Namco Entertainment for the Wii. The game combined elements from two of Namco's other series, Pac-Man and Katamari Damacy.

Star Ving is a planet with several islands that are all connected together by rainbows. The inhabitants of Star Ving are the titular Munchables. Led by the mysterious Great Elder, the Munchables are a race of gluttonous creatures who spend their days chowing down from an endless supply of food created by magical artifacts called Legendary Orbs. But one day, a fleet of UFOs appear from a hole in space and steal the Legendary Orbs, destroying the rainbows connecting the islands and cutting off the Munchables' food supply.

Then the UFOs deploy an army of creatures called "Tabemon Monsters" all over the islands to wreck havoc on Star Ving. It's up to the Great Elder and the game's protagonists, two Munchables named Chomper and Munchy, to traverse the islands of Star Ving, retrieve the Legendary Orbs, and defeat the Tabemon Monsters. And unfortunately for the monsters, they bear a rather uncanny resemblance to the various foods the Munchables love to sink their teeth into...