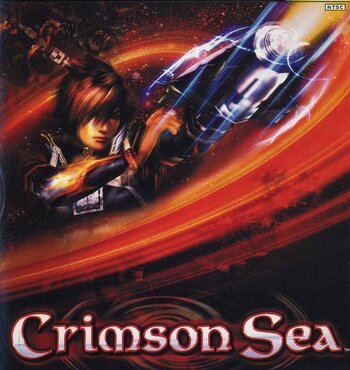 Crimson Sea is a hybrid Hack and Slash and Third-Person Shooter game with RPG Elements which was created by Koei for the Xbox in December 2002, making it something of an oddity as it was a brand new IP for the American platform from a Japanese developer. It was followed by a sequel, Crimson Sea 2, which jumped platforms to the PlayStation 2 two years later. They have a science fiction setting, taking place in the Theophilus star system where space travel is common and technology is plentiful.

Crimson Sea follows the story of Sho, an out-of-work private detective initially hired to find a treasure by a busty young lady named Live-D; it turns out to be a recruiting mission for Sho and his partner Yangqin to join the Intelligence Agency of the Galaxy, or IAG, and become head of G-squad — a group of fighters including existing members Kecak and Bow Rahn along with recent transfer Shami, and later a loaned fighter named Diez — to confront a galactic threat known as the Mutons. To this end, Sho is informed he is a Vipa, a human with the power to harness Neo-Psionics, a power based on manipulation of resonant sound frequencies. But eventually, a bigger threat than the Mutons arises.

Crimson Sea 2 picks up two years later, with a new alien force known only as the Menace, capable of reproducing by infecting humans. It also introduced Feanay as a new operative for the IAG, as well as the ability to play as her. While it completely drops the squad angle from the first game, it also introduced a Split Screen multiplayer mode.

The original Crimson Sea remains exclusive to the Xbox, but Crimson Sea 2 was eventually put up for digital sale on the Play Station Network'' as a PS2 Classic in 2013.