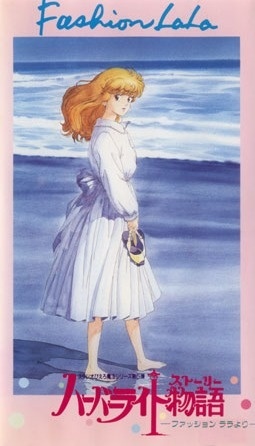 Miho is an aspiring fashion designer and dancer who lives with her aunt and older cousins, who are preparing for the upcoming Disco Queen Contest in their seaside town. With the exception of the youngest cousin Shuri, her family treats her poorly and disrespectfully, having her run errands for their boutique and ridiculing her attempts at fashion design.

The upcoming Disco Queen contest sponsored by the mayor is the big news in town, but Miho can't participate because she isn't old enough. Her family isn't very kind to her, much like in the classic tale of Cinderella. Shuri secretly asks Miho to design and make her a dress for the contest. Miho's dream is that one of the dresses she designs will enter, so this opportunity is her dream come true. Of course, she can't let the others find out about her project, or her aunt will be really mad - she plans for her 3 daughters to compete in dresses she designs herself.

Everyone is gearing up for the big event except the mayor's son, a rebel named Kit who is against his father's use of politics and the fact his father probably rigged the event. He plots to wreak the event completely, when he has a few chance meetings with Miho, and is charmed by her sincere belief in her dreams and honesty and innocence. She tells him at one point she earnestly believes a "goddess of dreams" (someone who did find what they wanted, purely, and has no impure intentions coming from their heart) will show up at the contest, something he can't imagine happening in their town, as he is older and has seen too much on the streets.

On the night of the dance, Miho comes home to learn from Shuri that her aunt has destoyed the beautiful dress once learning of it. Shuri will still wear the dress her mother designed for her, but the dress Miho made embodied her dreams she wanted to take to the dance and see shine. Heartbroken, Miho cries in the attic, awakening two fairies on the cover of a dusty book. Seeing her cry, they feel sorry for the kind girl and decide to help her. They transform her into Fashion Lala, a blond beauty of 15, wearing a beautiful gown Miho herself sketched. The magic will last only for one night, they tell her.

By now, the dance has been ruined by Kit and his gang of bikers, but Lala arrives and takes the stage. She launches into a song and dance number, changing into different outfits, all of which were designed by Miho. For Miho this is her dream, simply to be at the dance in what she's created. For Kit, Lala embodies the "goddess of dreams" Miho told him about.

The story ends with Miho waking the next morning and her father arriving home for her.

Studio Pierrot would later heavily revise this story and the end result would be Magical Stage Fancy Lala in 1998.