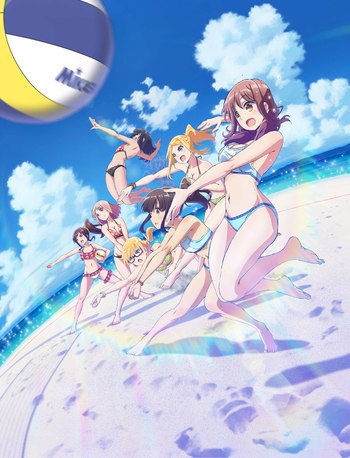 Haruka Ōzora is a high school girl who is conscious about her height. When moves to Okinawa, she meets with her cousin, Kanata Higa. Shortly after arrival, Haruka becomes enthralled with the beautiful beaches and the prospect of being able to swim, surf and dive. She encounters two other girls, Narumi Tōi and Ayasa Tachibana, practising for their beach volleyball tournament. Haruka learns that Kanata was once a beach volleyball player, but had given up because of her short stature. With Haruka's encouragement, Kanata returns to beach volleyball: between her experience and Haruka's height, the two partner up and practise with the intent of making it to the junior tournament.

Harukana Receive (はるかなレシーブ) is a manga written and illustrated by Nyoijizai, which was serialised in Manga Time Kirara Forward from 2015 to 2020. In North America, Seven Seas Entertainment has licensed the manga.

The anime adaptation was released as a part of the Summer 2018 anime lineup. It is directed by Toshiyuki Kubooka and is produced by C2C. Funimation's Simuldub of the anime series premiered on July 24th, 2018. The series can be watched here