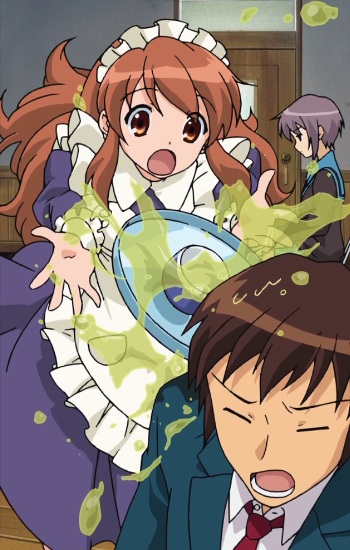 That's HOT! *beat* I mean the tea...it looks hot...it might burn him...seriously, man! That's dangerous.
"Today's Resolution! I will not trip where there is nothing to trip on! ...Waugh!"
— Sae Sawanoguchi, Magic User's Club
Advertisement:

Dojikko (ドジっ子) is Japanese for clumsy with the feminine suffix "-ko" added on the end. In other words: "clumsy child". The word can be used to describe people of both genders. It has also become a major "element of Moe" in anime and manga, and Anime Fanspeak for Cute Clumsy Girl. The attraction is not limited to Japan, the concept of a Cute Clumsy Girl has worldwide appeal, mainly because her clumsiness makes her more approachable.

The main difference is that in the West a Cute Clumsy Girl is probably supposed to make the audience chuckle, while Dojikkos tend towards making them say, "Awwww! She's so cute!" However, the core concepts overlap so much that all examples should be put on the Cute Clumsy Girl page. You should also go there for a more general summary of how this interacts with other tropes. This page serves to define the fan term, provide some detail on how it is used in anime works and fandom, and discuss trope combinations that are common in anime but not the West.

To be labeled a dojikko, all a girl has to be is clumsy in a cute way. So an anime fan could use Dojikko to refer Western examples as well. Still, there are a few noticeable differences between anime dojikko and western examples.

Western examples tend to tack on clumsiness to an otherwise already established character idea so as make her more approachable. Anime examples tend to start out building a Moe character and often select Dojikko as a starting point, although Dojikkos almost always have additional moe elements added to create a "twofer" (or more) in the moe department. Because of this a dojikko is much more likely to appear as a supporting character in an anime because she's an easy addition to appeal to a large fanbase. Western works tend to use cute clumsiness as a way to humanize the heroine, while western Plucky Comic Relief tends to just be The Klutz.

Some of the more common additional moe elements include:

Apparently there are some subsets of anime culture that use dojikko as short hand to refer specifically to The Pollyanna + The Ditz + Submissive variation. This is probably the most common subtype of dojikko, and might make up as much as 1/3 of all anime dojikkos.

As another aspect of the character, Fanservice can play a large role in the character type. "Accidental" pratfalls often result in Panty Shots (no Magic Skirts here), and there is often plenty of overlap with Ms. Fanservice in this trope. (Unless they're going for a more innocent emotional connection).

The popularity of this character among the anime subculture of Japan has led to a proliferation of these characters in anime, thanks in no small part to their ability to sell The Merch. Expect figurines

, wall scrolls, and full-sized body pillows. Because of this, they may be added as a way of expanding the marketability of a show, much like the Token Mini-Moe. Expect Tareme Eyes.