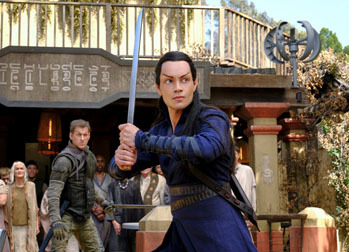 As per usual for this show, The Teaser is a Flashback. It's the evacuation of the Romulan Star System— which the Federation clearly halted partway through, as Picard is visiting refugees on the planet Vashti and discussing the ongoing efforts with them. He is the guest of the Qowat Milat, a Romulan sect of warrior nuns, and he spends quality time with a boy named Elnor, a Heartwarming Orphan whom the sisters adopted despite his gender. Picard and Elnor are bonding over The Three Musketeers when the admiral gets paged about the First Contact Day Synth Attacks, and he leaves abruptly to (try to) do something about it.

Back in the present, La Sirena is at warp. Dr. Jurati visits with Rios, hoping to find something to do: Sci-Fi Writers Have No Sense of Scale, but Agnes is discovering just how big space really is, and is now bored out of her skull. Rios would rather she leave him alone so he can read his essay, The Tragic Sense of Life by Miguel de Unamuno

. (Even though Rios can empirically speak Spanish, he is reading the English translation.) They are interrupted by Raffi, who wants to know why La Sirena has changed course.

Picard is in the holodeck, where the Emergency Hospitality Hologram has re-created his study at Chateau Picard. His solitude is interrupted by everyone on the ship: Raffi charges in and demands to know why "Go to Freecloud" suddenly turned into "Have a Side Quest on Vashti," Rios hates the fucking EHH, and Dr. Jurati is just bored. Raffi directly questions Picard's state of mind, while Rios brings up more practical concerns: the Qiris sector, formerly a part of the Romulan Neutral Zone, has become a Wretched Hive, with only Vigilante Militia organizations like the Fenris Rangers providing any sort of order; Vashti in particular is now under the "protection" of the warlord Kar Kantar, who rules the sector with a 23rd-century Romulan Bird-of-Prey (see TOS: "Balance of Terror"). Besides, Vashti is rife with the "Romulan Rebirth" movement. But Picard is convinced that the services of a Qowat Milat warrior nun is his best shot; besides, he knows that he is unlikely to have a chance to pass this way again, and Dahj's death has him thinking of Elnor. If the Qowat Milat don't want to help, they'll say so: they practice the Way of Absolute Candor (aka Brutal Honesty).

On the Artifact, Soji is watching an old TiVo recording of a Romulan talk show while she plays with pixmit cards. In the projection, Ramdha is talking about "Ganmadan," which the Romulans say is the Day of Annihilation. She says how the day is the end of all life everywhere, when shackled demons will answer the call of Seb-Cheneb, the Destroyer.

Picard beams down to the surface of Vashti. In the flashback, the Romulans were eager to meet him; now, fourteen years later, they show little besides veiled hostility. (The "Romulans Only" sign at the Romulan Social Club doesn't help.) He visits the nunnery of the Qowat Milat to beg them for help. Elnor, now grown up, treats him with nothing but contempt, remembering only the Parental Abandonment that Picard showed him. However, Zani, the head of the warrior nuns, urges Picard to make his case to Elnor. He can never join the Qowat Milat on account of being male, but he is trained in their ways; Zani also wants him (Elnor) to see some of the galaxy instead of being stuck on Vashti.

Soji syncs up with Narek about Ramdha, who attempted suicide after her meeting with Soji. She has noticed that Narek has no (visible) rank or badges of authority, and wonders whether he might be Tal Shiar. To distract her, Narek takes her to a corner of the Borg Cube, in Environmental Control, which has become a makeshift Sock Slide Rink. However, their fun (and smooching) is interrupted when Narek asks about how she came to the Artifact. According to her own reports, she was aboard the USS Ellison, but the ship's passenger manifest shows no record of her ever being there. It's hard to tell whether Soji is more disturbed by the allegations that she's hiding something, or the idea that she doesn't know her own past.

From orbit, Raffi picks up signs that Romulans are passing the news of Picard's arrival. Picard is ready to head shipside, but the security systems around the planet (installed by the aforementioned Fenris Rangers) only allow beaming every half-hour. So Picard tries once again to make friends with the local Romulans... as well as tear down the "Romulans Only" sign. He is then approached by an ex-Romulan Senator named Tenqem Adrev, clearly a member of the Romulan Rebirth movement, who accuses Picard and Starfleet of trying to undermine Romulan independence. Picard protests the accusations, but Adrev isn't really interested in a debate; he's interested in a Sword Fight. Picard refuses. Adrev also isn't interested in a fair fight, but Picard doesn't get skewered; instead, Elnor appears, drawing his own blade. "Please, my friend. Choose to live." When Adrev and his companions don't, Elnor takes care of them. ("I regret your choice.") He then declares that he has, in fact, chosen to take up Picard's cause in the Qowat Milat fashion, and declares himself Picard's qalankhkai. Picard then addresses the crowd in general and Elnor in particular, apologizing for failing his (former) Romulan friends.

Aboard La Sirena, Picard has stern words with Elnor: the young man must swear to serve Picard, to hurt who he wants hurt, but also to refrain from killing anyone else. Elnor agrees. Agnes asks how Picard managed to gain the allegiance of a Qowat Milat, and Picard explains that he merely fit the requirements: a qalankhkai will only swear themselves to a lost cause.

There's another conversation between Narissa and Narek about the latter's (lack of) progress with Soji. The only new bit of information dropped is that the two believe that Soji is not the Last of Her Kind: there are more, and the Zhat Vash want all of them dead. Since Narek buttering Soji up is really the only way that they can get the location of the other synths, he's allowed to proceed.

Kar Kantar's ship has arrived. La Sirena begins its evasive maneuvers, but they are trapped between the old Bird-of-Prey (which, despite being 150 years older, is still larger and more powerful) and the defensive satellites in orbit around Vashti. The turning point comes when a smaller ship plunges in and attacks; now faced with two more nimble ships, the Bird-of-Prey is overpowered. However, it manages to land a critical hit on the new ship. As the crippled vessel tumbles towards the planetary shields, its pilot hails La Sirena (Picard orders a channel opened; Rios agrees) and requests to be beamed aboard (Picard orders it done; Rios agrees).

"You owe me a ship, Picard," Seven of Nine declares, before passing out on the floor.

This episode won an Emmy Award for Outstanding Prosthetic Makeup for a Series, Limited Series, Movie or Special.