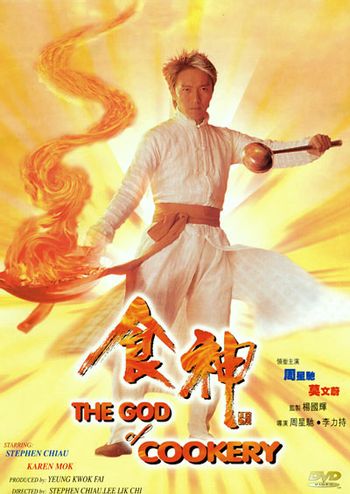 This is what happens when a man best known for martial arts comedies decides to make a cooking show.

Stephen Chow plays "Stephen Chow" (the Chinese characters in his name are different from his actual name), the undisputed "God Of Cookery". His respect highly valued and his skills beyond compare, he's supported by The Triads and the Tongs and big businesses alike, making him untouchable, until all of a sudden his support dries up and he's cast aside for Bull Tong, who reveals Stephen can't actually cook. Thrown and beaten to the street, he's helped by a disfigured noodle vendor named Turkey, until he's dead smack in the middle of brutal gang politics of street food vendors between Turkey and her rival Goosehead. Can Stephen find a way to regain his honor and title?

God of Cookery provides examples Of: