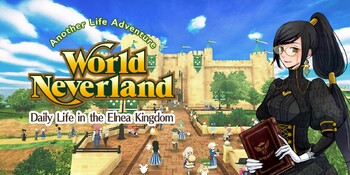 WorldNeverland (sometimes abbreviated as Worneva) is a Japanese series of Life Simulation Game titles, developed by Althi, that originated on the PC, and later saw several installments on the PlayStation Portable. The latest installment, and only one to be released in English so far, is a mobile game that later received a port to the Nintendo Switch in 2018. This game's full title is WorldNeverland: Daily Life in the Elnea Kingdom.

In the world of WorldNeverland, humans age three times as fast as they do in our world, so a 6-year-old in their world is comparable to an 18-year-old in ours. Otherwise, life is much like it is in our world: People have jobs, they have fun, they fall in love and get married, and they eventually die.

When players begin the game, they take on the role of a traveler who has recently stopped in the kingdom on their travels. Their initial goal is to become a citizen of the kingdom. However, the game is very open and freeform, allowing players to pursue a number of goals. They can take on jobs such as farmer and priest, form friendships with NPCs (and eventually get married and start a family), grow crops and flowers, go fishing, explore dungeons and fight monsters, do quests, attend a variety of events and festivals, and even influence the growth of the kingdom. Notably, the game has a large gameworld with a huge number of NPCs, all of whom have their own lives and personalities. In fact, the "kingdom simulation" aspect of the franchise is a (legally) patented aspect of the series!

To put it in a X Meets Y way, it's like Rune Factory meets The Sims.

Note: Since only one game in the franchise has come out in English, this list will primarily be about the tropes in Daily Life in Elnea Kingdom.