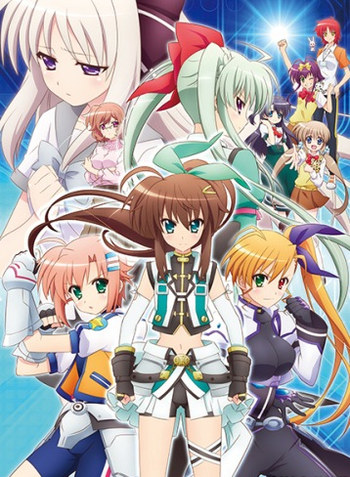 "Thou shalt not be afraid, I am with you."

ViVid Strike! is the seventh entry (sixth chronologically) in the main Nanoha continuity and the first one since StrikerS to debut as an anime. It is set one year after Magical Girl Lyrical Nanoha Vivid. Like StrikerS Sound Stage X before it, ViVid Strike! only features characters introduced in ViVid* Plus Vivio, Nove, Ixpellia, Sein, and Lutecia and stars a brand new character named Fuka Reventon who seeks to reconnect with her childhood friend Rinne Berlinetta.

The series began airing in October 2016.

NOTE: Only general tropes for the series are listed here. For character-specific ones, check out the character page.