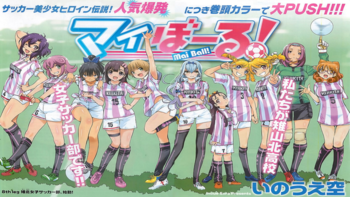 The Beautiful Game has never been this beautiful.
Advertisement:

Mai Miyano has been helping out her childhood friend, Kunimitsu Hasuga, every morning with soccer practice ever since they were little. After years of practice, Kunimitsu has been MVP for 2 years in a row at the middle school national tournaments. One day, Reika—one of Kunimitsu's admirers—witnesses the two childhood friends practicing, and is shocked by Mai's ability to keep up. Determined to prove herself to Kunimitsu, Reika Hakurai challenges Mai to a soccer challenge!

Caught between her childhood crush and new competition, will Mai be able to hold her composure? With a tendency to get too nervous or fantasize about Kunimitsu, Mai has a hard time playing soccer outside of practice. Can she stop her lewd fantasies long enough to beat Reika?

Mai Ball! combines intense girls' football matches with the Harem Genre in a healthy balance, with Fanservice focusing more on the lower body unlike in many titles from the Harem Genre. And unlike many sports series, the Opposing Sports Teams are portrayed more sympathetically and with more honorable characters, even going as far as giving characters from those teams A Day in the Limelight.

As football became the second-most played sport in Japan thanks to Captain Tsubasa, many prominent characters in the series (including characters from the Opposing Sports Teams) are given image colors as Shout-Outs to several professional and national football clubs in Real Life.

Not to be confused with the borderline H-manga My Balls or "Ow, My Balls!!", the Show Within a Show from Idiocracy.