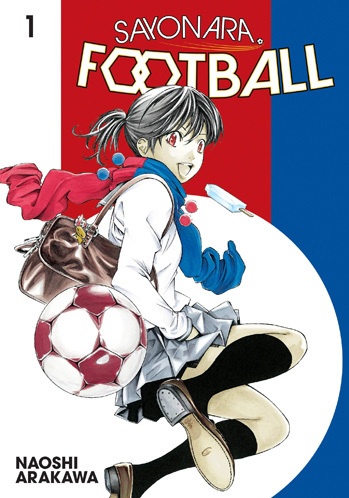 She is a cute footballer!
Advertisement:

Nozomi Onda is in her second year on the middle school soccer team but has yet to play a single game because she is a girl. Growing up playing soccer, she has the technical skills, endurance and the elegance. However, as a girl, she can't overcome the physical difference between them and she can see all her teammates who she grew up playing soccer with getting further and further away from her. Even her younger brother, Junpei, who is also on the team, is starting to rise above her. Her sensei knows that Nozomi is an amazing player but since soccer is such a physical sport for boys, he can't let her play. Nozomi isn't the kind of girl that gives up so instead she practices harder than anyone in the hopes of one day playing in an official game.

Sayonara Football is a manga by Naoshi Arakawa (Your Lie in April fame), and his first published work. The manga ran in Kondansha's shounen Magazine E-no for 8 chapters throughout 2009 and 2010, eventually collected into 2 volumes. Arakawa would go on to continue Nozomi Onda's story in Farewell, My Dear Cramer, though with Nozomi no longer as the primary focal character.

The manga is published digitally in English by Kodansha Comics USA. It's also currently available for digital purchase via Comixology

In September of 2020, a theatrical anime was announced

for Sayonara set to premiere in April of 2021, animated by Liden Films, with Farewell receiving a TV adaptation from the same creative team. The movie was later delayed to June 11, 2021.