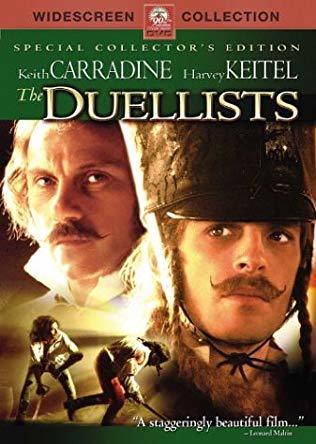 "The duellist demands satisfaction. Honour, for him, is an appetite. This story is about an eccentric kind of hunger. It is a true story and begins in the year that Napoleon Bonaparte became ruler of France."
— Opening Narration
Advertisement:

Two French cavalry officers in Napoléon Bonaparte's Grande Armée have a disagreement. It can only be resolved, of course, with a duel. And another, and another, and another, as they meet half a dozen times over more than a decade. They duel with cavalry sabres, with smallswords, with pistols. Despite their failure to kill one another, the fiery Gabriel Féraud (Harvey Keitel) keeps challenging the cool, more rational Armand d'Hubert (Keith Carradine), long after Féraud has forgotten the original slight.

Ridley Scott's first feature film examines Féraud's consuming obsession, and d'Hubert's inability to say no to another potentially fatal challenge. The screenplay is based on the short story "The Duel" by Joseph Conrad. Winner of the Best Debut Film award at the 1977 Cannes Film Festival.

Not to be confused with Duel, another directorial debut by another prominent director.