Film / A Study In Reds 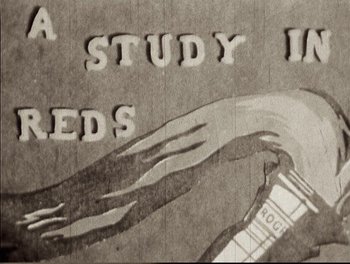 The "Tuesday Club", a Real Life social club of small-town Wisconsin ladies, has a meeting of a local chapter. The lecture topic for the meeting is "reddest Russia" and its "famous Soviets." As the chairwoman starts out on what appears to be a deathly dull lecture about the Soviet Union and its communal farms, one of the women in the club nods off. She has a dream in which she and her fellow middle-aged housewives are instead Soviet babushkas living on a communal farm, subject to the tyranny of Josef Stalin.

Miriam Bennett was the daughter of a photographer and herself a member of the Amateur Cinema League; her short films were some of the most sophisticated amateur filmmaking of the era. Ironically, Bennett's droll satire of both communism and anti-communist hysteria grossly underestimated the horrors taking place in the Soviet Union, where a terrifying famine

was just then underway.