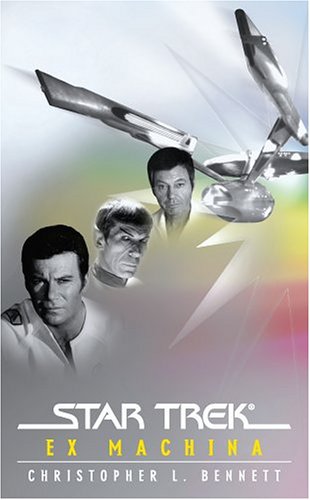 A book in the Star Trek Novel Verse, set in the immediate aftermath of Star Trek: The Motion Picture. Dealing with the ramifications of that film's events, in particular Spock's newfound philosophy of balancing logic with emotion, the novel also follows up on the classic Star Trek episode "For the World Is Hollow And I Have Touched The Sky".
Advertisement:

In the aftermath of the astonishing events of Star Trek: The Motion Picture, the captain and officers of the U.S.S. Enterprise remain haunted by their encounter with the vast artificial intelligence of V'Ger... and by the sacrifice and ascension of their friend and shipmate, Willard Decker. As James T. Kirk, Spock, and Leonard McCoy attempt to cope with the personal fallout of that ordeal, a chapter from their mutual past is reopened, raising troubling new questions about the relationship among God, Man, and AI. On the recently settled world of Daran IV, the former refugees of the Fabrini worldship Yonada are being divided by conflicting ideologies, as those clinging to their theocratic past vie with visionaries of a future governed by reason alone. Now, echoes of the V'Ger encounter reverberate among the Enterprise officers who years ago overthrew the Oracle, the machine-god that controlled Yonada. Confronting the consequences of those actions, Kirk, Spock, and McCoy also face choices that will decide the fate of a civilization, and which may change them forever.