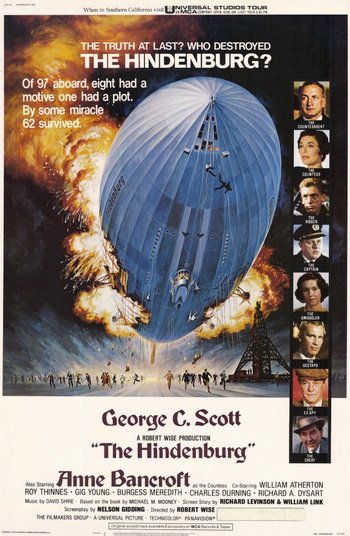 The film details the final trans-Atlantic voyage of the eponymous German zeppelin in 1937, and its tragic conclusion. While the real-life incident remains clouded with conflicting theories as to the underlying cause of the disaster — a number of which get name-checked herein — the film runs with a conspiracy theory (as did the book it's based upon), depicting the Hindenburg's demise as an act of politically-motivated sabotage.

The story unfolds rather like a murder/crime mystery: Col. Franz Ritter (Scott) of the German Luftwaffe is assigned as special security officer aboard the Hindenburg for her latest voyage to America, after the German embassy receives a bomb threat. Ritter must investigate the crew and passengers, many of whom have something to hide, and figure out who is plotting to bomb the airship and try to prevent it. Read your history books again to see how well that turned out.