"Guys, this is fucking stupid...Guys, no seriously, what are you even doing?! Why isn't everyone working?! Get out of here!"
— Gus 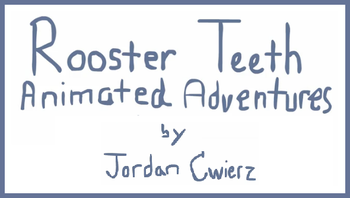 "That's the stupidest thing I have ever heard."
Advertisement:

Rooster Teeth Animated Adventures, also known as RTAA for short, is an animated comedy series created by Rooster Teeth, based around animating the lives of the many employees of Rooster Teeth and the hijinks they get themselves into, whether it be related to antics around the office, traveling, or just home life. Some of the stories include such things as: physical torment, hilarious coincidences, and embarrassing moments.

Most of the audio comes from The Rooster Teeth Podcast, although a multitude of different sources like Off Topic, On The Spot, and Always Open have been used over time to create new episodes. The series was originally animated and directed by Jordan Cwierz in a simple, somewhat messy format with heavy focus on blue coloring. Due to his increasingly busy workload as the animation department's Creative Director, the series is directed by Andrew Lhotsky and animated by various animators in the 2D animation department.

To date, the series has had more than 300+ episodes, and is currently still going strong with weekly episode releases. The first episode can be found here

, and the playlist for the entire series can be found here

Has character and recap pages in dire need of additional work.