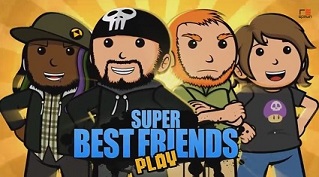 The hypest gameplay on YouTube! note From left to right: Woolie, Matt, Pat, and Liam
Matt and Pat!
They're friends who play together
Learning and sharing and junk!
One is nice
and the other one is less nice!
Who couldn't love Matt and Pat?
Best friends play together!
— Season 2 intro songnote Sung to the Green Greens Theme from Kirby
Advertisement:

was a Web Original comedy series found on the Machinima YouTube channel.

The series was an MST of sorts; two friends named Matt and Pat play video games, argue, and mock the game they are playing and each other. The series does not focus on the two friends; they weren't even named until the second season. According to the show's Facebook page, it started when The Switcher (Matt) invited his friend Snapshot King (Pat) over to play Kirby's Epic Yarn and record themselves taking their playthrough way too seriously.

The videos are edited so the audience only sees highlights of their gaming session; they are around ten to fifteen minutes long. The friends also have a spin-off show called TBF: Funtime Adventures, an animated show about discussions the two have about games when not playing them.

which contains several mini-episodes, full-length Let's Plays, and a multitude of themed series, all centered around playing video games hilariously. The show's Facebook page can be found here.

On December 23, 2016, Liam revealed he would be leaving permanently for mental health reasons (a week earlier, Matt also announced a hiatus due to severe overstress and other real-life complications, but he returned to the channel a month later). However, Liam still streams on his own channel, Rising Superstream

, and continued to occasionally collaborate with the remaining members of the Zaibatsu.

On December 16, 2018, it was revealed that Super Best Friends would be officially ending,

with each member going on to focus on their solo projects:

Pat and Woolie still work together on the Castle Super Beast podcast, a Spiritual Successor to the original Super Best Friends Podcast. They also collaborate on occasion with Let's Plays much like their Zaibatsu-era content, beginning with the Resident Evil 2 (Remake) and continuing onto Devil May Cry 5.