Manga / Somali and the Forest Spirit 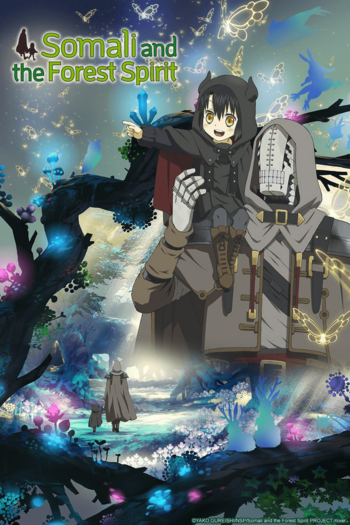 The world is ruled by spirits, goblins, and all manner of strange creatures. The species known as "humanity" once populated this world as well, but upon encountering monsterkind, humans grew fearful and lashed out. Now human beings are persecuted to the very point of extinction, and to most monsters are nothing but a distant memory.

In a lonely forest, a golem resided as the guardian spirit. Its purpose was to protect the forest and ensure its continued survival, though without interfering with the individual cycles of nature. One day, that golem came across a child in rags and chains- a child that lacked claws, horns, or fangs. Upon seeing the golem, the human child uttered a single word: "Dad."

This is a record of the pair, one a member of a ruined race, the other a watchman of the forest. It tells of their travels together and of the bond between father and daughter.

Somali and the Forest Spirit (ソマリと森の神様, Somari to Mori no Kamisama) is a Japanese fantasy manga series by Yako Gureishi. It began serialization online in April 2015 via Tokuma Shoten's online manga magazine Web Comic Zenon. Unfortunately, after the manga went on hiatus in October 2019, it was later officially discontinued in December 2020 due to Gureishi's worsening health issues. An anime television series adaptation by Satelight and HORNETS began on January 9, 2020, and can be viewed here

Somali and the Forest Spirit provides examples of:

Alternative Title(s): Somali And The Forest Spirit, Somari To Mori No Kamisama