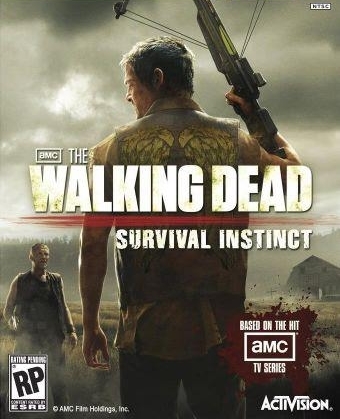 The Walking Dead: Survival Instinct is a 2013 First-Person Shooter developed by Terminal Reality Games and published by Activision for PS3, Xbox 360, PC and Wii U. It is set in the continuity of the AMC TV series, and follows Merle and Daryl Dixon as they fight to survive during the initial outbreak of walkers during the Zombie Apocalypse.
Advertisement:

After the death of a loved one, Daryl Dixon and his friend Jess Collins decide to leave their mountainous retreat and find supplies and assistance from a nearby town. As the game progresses, Daryl eventually comes into contact with several survivors - and eventually Merle, who he discovers in the town of Fontana attempting to hold off a group of soldiers. Together, the duo make their way across Georgia, scavenging for supplies and meeting more survivors.

Missions typically consist of Daryl receiving quests from other survivors and/or having to find supplies to keep the survivors' convoy running. In between missions, the player can choose which routes to travel, and have opportunities to scavenge items from small villages.