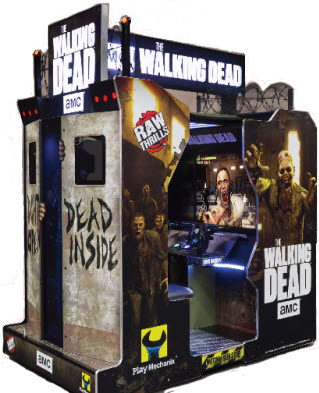 The Walking Dead Arcade is a 2017 horror light gun arcade game by Play Mechanix and Raw Thrills, somewhat based on the AMC series of the same name.

In it you play as a group of survivors that have taken refuge in prison complex, but it soon becomes breached by Walkers and they must escape. Unlike most rail shooters, your primary weapon is a crossbow in reference to series icon Daryl Dixon, although the game does not feature any characters from the show.

The game was released January 2017. Here's a preview

and here's a playthrough

The Walking Dead Arcade has the following tropes: