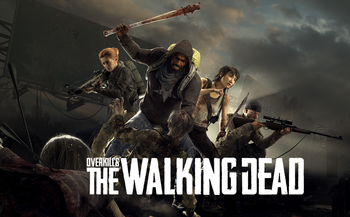 OVERKILL's The Walking Dead is a 2018 4-player co-op First-Person Shooter set in the continuity of The Walking Dead comic book series, developed by OVERKILL Software and published by Starbreeze.
Advertisement:

Set in the ruins of Washington D.C. during the zombie apocalypse, the game follows a group of survivors known as the Camp, who come into conflict with a larger, much more violent and thuggish group of survivors known as the Family. The Camp's four primary troubleshooters are Heather the Scout, the Camp's co-founder who favors a crossbow; Aidan the Tank, a shotgun-wielding brawler; Grant the Tactician, a Cool Old Guy survivalist sniper; and Maya the Support, an SMG-wielding medic.

The game has a character upgrade system and mission structure heavily influenced by OVERKILL's previous game, PAYDAY 2, with players being heavily encouraged to replay missions over and over again at increasing difficulty to earn weapons, experience, and resources. Additionally, a base management system is present in which players recruit NPC survivors and upgrade their base's facilities to upgrade their character's capabilities, while at the same time having to maintain resource levels by completing missions to keep the base stocked with supplies.

Like PAYDAY 2, OVERKILL planned for The Walking Dead to be continually updated with new missions and content as time progresses. The initial release of the included Season 1 of the campaign and Season 2 was scheduled to be released throughout 2019, however the license holder, Skybound Entertainment, terminated their deal with Starbreeze in February 2019 after disappointing critical and commercial reception and had the game removed from Steam, killing any chances of Season 2 releasing in its entirety.