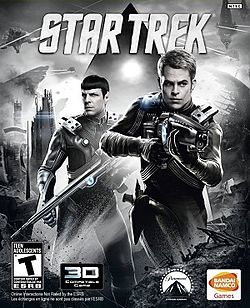 Star Trek: The Video Game is a third-person action-adventure game released in 2013, and is the video game sequel to the 2009 film of the same name, which is part of the rebooted Star Trek franchise.

The game, which takes place between the 2009 film and Star Trek Into Darkness, follows the crew of the Enterprise as they investigate a research station located near a binary star, and discover a terraforming device that has unintentionally resulted in a new enemy threat entering the galaxy through "rips" in space — the Gorn Hegemony, who plan to steal the device and enslave the galaxy for their own means.

A notable feature of the game is its drop-in, drop-out co-operative campaign, which allows players to step into the shoes of Captain James T. Kirk or Spock as they fight across various locales, including the terraformed New Vulcan colony, a Federation Starbase and even the Gorn homeworld itself. In addition, the player can scan various audio logs and collectibles throughout the game world, which will allow the player to upgrade Kirk and Spock's tricorder and personal weapons. Unlike other works featured in the Star Trek Expanded Universe, Paramount has gone on record as saying that the game is canon with the rebooted series.

The game was critically panned at its release for its visuals, glitches, broken co-op, and numerous post launch issues that made it borderline unplayable. Little has been done to change initial impressions since it's come out.