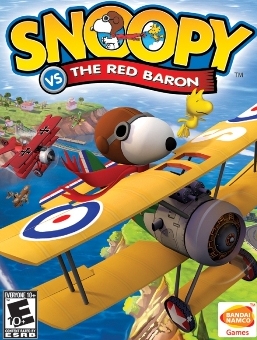 Snoopy vs. the Red Baron is a 2006 video game developed by Smart Bomb Media and published by Bandai Namco Entertainment. It was released for the PlayStation 2, PC, and PSP. Rated Everyone 10 and up, it is a flight combat game starring the lovable beagle from Peanuts. The story is presented as Snoopy's dream (that he writes down into a manuscript) starring Snoopy as a WWI flying ace (with numerous other Peanuts characters serving as allies) on a mission to defeat the villainous Red Baron and his Flying Circus. Along the way, he flies in his trademark Sopwith Camel, unleashing bullets, fireworks, potatoes, and other ammunition on all sorts of enemies planes, boats, and mechs.

It got a successor in 2010; see Snoopy Flying Ace for information on that game.