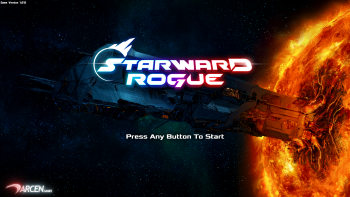 Starward Rogue is a twin stick shooter with Bullet Hell and Roguelike influences. It was made by Arcen Games, and released in January 2016 for PC, with an Augmented edition following on January 2018.
Advertisement:

You play the role of a disembodied head in a mech, at the top floor of a giant spaceship called the Megalith. In the intro, a voice calling himself Rodney asks him to travel to the bottom floor, and get him out.