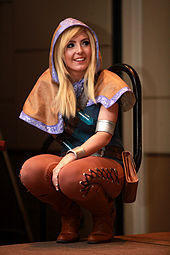 Cosplaying as Lux from League of Legends.
Advertisement:

Jessica Nigri (born August 5, 1989 in Reno, Nevada) is a model and voice actress known for cosplaying as various characters from video games, anime, and manga. She plans to eventually retire from modeling and to study and pursue a career in the "behind the scenes" aspects of marketing and advertising.